READ ABOUT SOME OF THE HORSES THAT SHADY HAS HELPED

Shady is helping all sorts of horses and riders all of the time. Here are just some of the stories of Shady’s equine clients.

…and his battle with tractors

Poor Dan didn’t have a very good start to his life. He was abandoned by the road as a two-year old, and was lucky to be rescued. Unsurprisingly, when he came into Jane’s life as a five-year old, he had issues. Some of these involved an understandable distrust of humans, but the worst thing for Jane was his terror of big traffic, particularly tractors. As Jane’s major plans involved long hacks, possibly leading onto endurance rides, living with the constant ‘what if’ fears of what they might encounter when out on the roads was hugely problematic. Dan was genuinely terrified, and his reaction was to want to spin and bolt for home. Rather than risk the accidents that that might cause, Jane would often hop off and lead him, which gave him some reassurance, but as Dan stands at 15.3 hh it was clearly not an ideal solution. 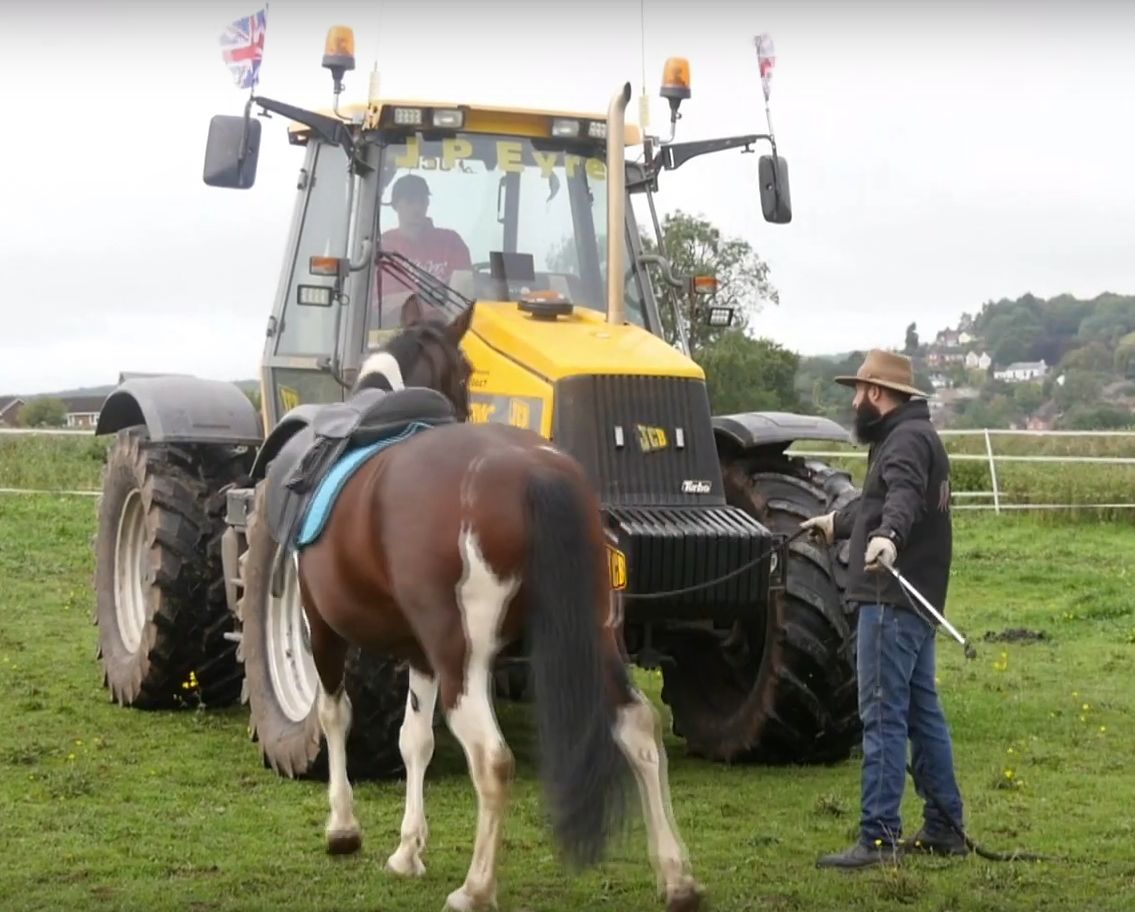 It was important for Jane to be ‘hands on’ in the training too. When Shady thought Dan was ready, Jane got to repeat most of the exercises herself, culminating in her riding Dan down the lane past a tractor. And so it was time for Dan to go home again, together with his ‘tractor diploma’. Of course, it has been important for Jane to keep up the good work and she is committed to monthly ‘top-up’ lessons with Shady. At home, she is doing groundwork with Dan most days, and always does some groundwork before she takes him out. But hacks are no longer the ‘terror fests’ that they once were. Jane’s confidence has grown along with Dan’s, and if they do encounter a lot of traffic, Dan can now be persuaded to tuck in behind another horse, rather than heading hastily for the exit. Happy horse, happy rider, and Jane says ‘I can highly recommend Shady to anyone having difficulties with their horse’.

Jane keeps Dan at livery on a working farm, so there wasn’t shortage of tractors to practice with, but no amount of exposure seemed to help Dan with his fears. So it was that Jane turned to Shady Horsemanship for help. Jane had been following Shady on Facebook and liked what she had seen. Shady first travelled to meet Dan and Jane in Chester, but Shady advised that the rehabilitation process would be quicker if Dan came to live with him for six weeks (it would have taken more like twenty once-a-week visits if Dan had stayed at home). After a visit to reassure herself that the premises were good enough for her boy, Jane packed Dan’s bags and sent him off to Cheadle in Staffordshire for an intensive course of tractor therapy.

Jane had confidence in Shady from Dan’s first session. ‘Shady is such a lovely calm person, he doesn’t shout at the horses just calmly keeps asking them for what he wants them to do’. Back at Shady’s yard, Dan was first introduced to a set of ‘agility’ obstacles: tarpaulin, flag, plastic bag, umbrella, ‘car wash’ and so on. This gave Shady the opportunity to assess and work with Dan’s reactions, and to get him used to overcoming his fears. Then it was time to move on to the dreaded motor vehicles, starting with a quad bike. Dan progressed from sniffing the quad, to following it, to being passed by it to being ridden in the school with it. This process was repeated with a small tractor, a medium tractor and then a large tractor. The training culminated in Shady being able to ride Dan around the field while the big tractor was topping it, as Jane observed ‘I would never have believed it if not been there to see, Dan was so good’. 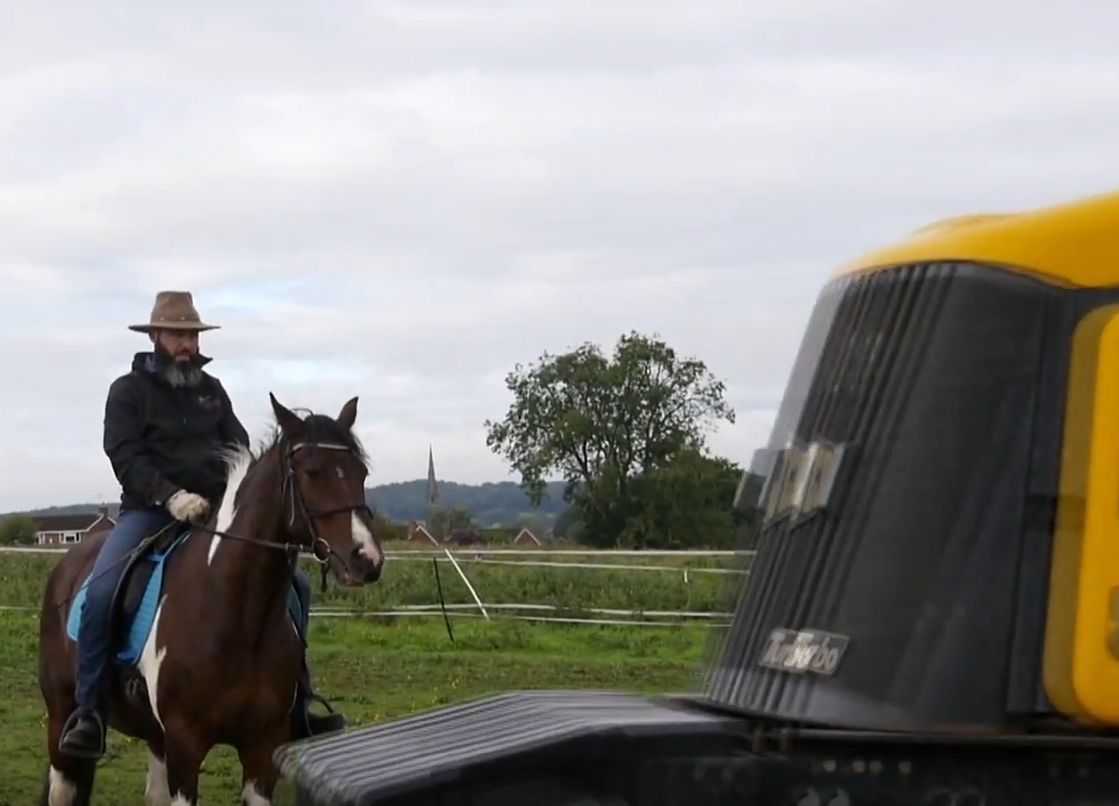 …and his groundwork journey

Groundwork hasn’t been a part of traditional horsey culture in the UK (at least not for the last two or three centuries!), so it came as a surprise to one of Shady’s clients just how much establishing good communication on the ground could translate to good communication in the saddle. Anna’s horse is named George; he’s a 16.3 hh, 15-year old bay Irish Sports Horse, whose previous career was show jumping and eventing. Anna originally turned to Shady for help because, as she says, “I needed to establish some groundwork routines to help my connection with him, and build his level of trust in me” she also wanted to learn techniques to help her handle him when he would “become over anxious, and struggle to stand still and manage his energy.” As we can all imagine, a bargy 16.3 hh ISH is a bit of a handful. 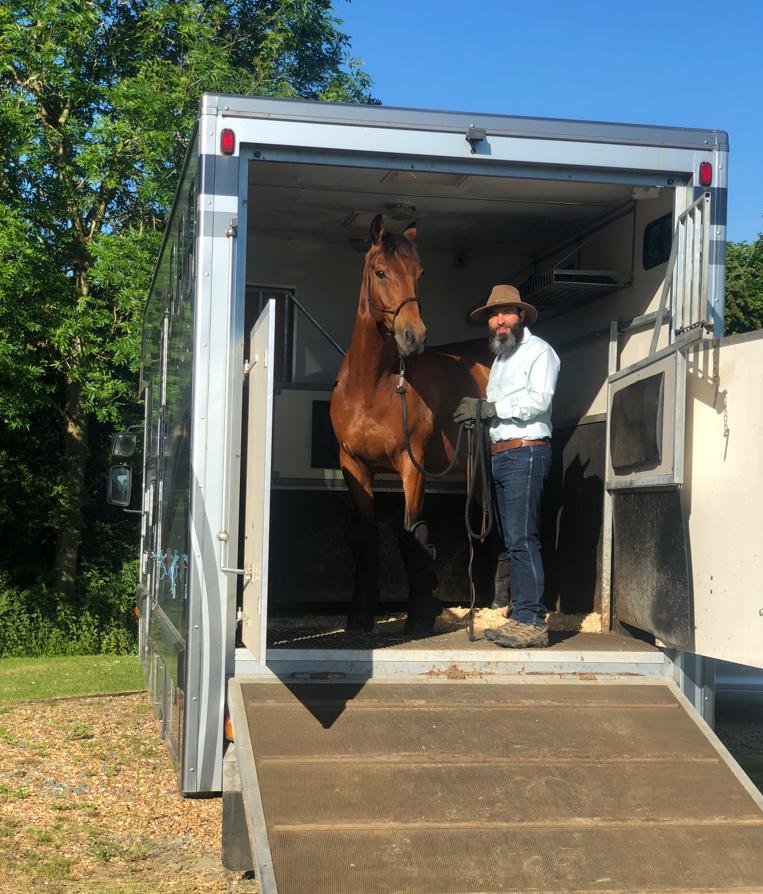 The groundwork helped in other areas too, like loading on the lorry when he hadn’t been travelled for a while. Generally, George loves his work, but the problem could be him loving it too much and anticipation making him over excited and hard to handle. Anna found that having support and guidance from Shady Horsemanship helped her to keep situations like that calm.

So groundwork is the basis of all sorts of good things for both you and your horse. Why not let Shady Horsemanship help you to add it to your horsey toolkit? 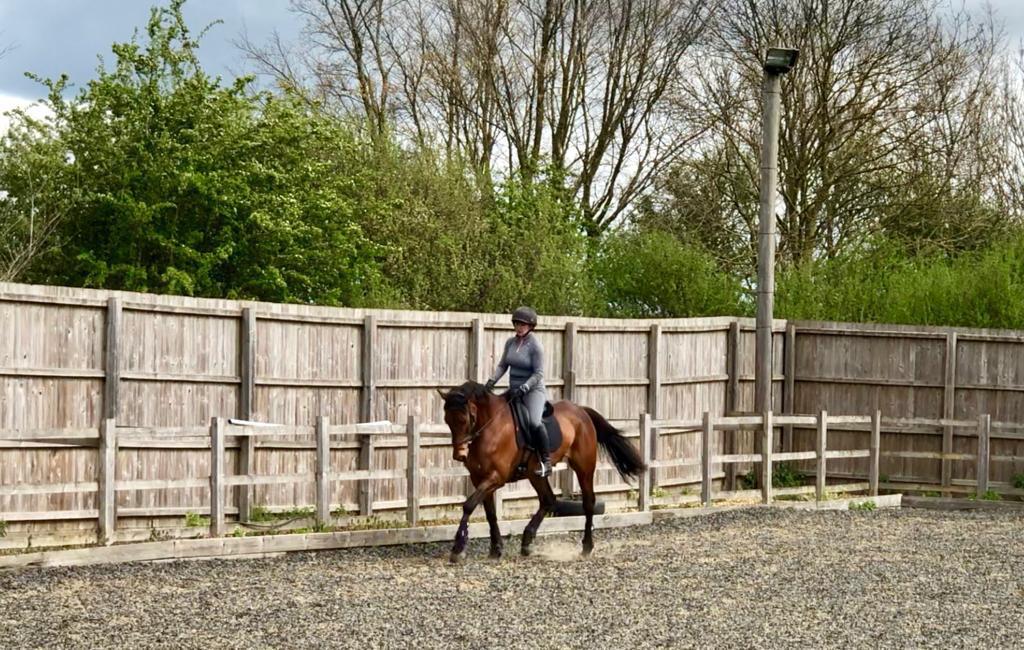 Anna has ridden since she was a child but had had no teaching or education in groundwork techniques. During sessions with George she was able to watch how Shady worked with him and pick up just simple things like the effects of body position and how to ask a horse to step back, working up to things like how to introduce him to lateral work on the ground to create a mind connection. As Anna said “I liked the fact that Shady would show me first, so I could create a mental picture and then let me learn by doing, gently suggesting where I could improve but in a way that built my confidence.”

As both Anna and George became more proficient and confident, Shady encouraged them to combine ground and ridden work. Anna says she found this particularly useful in managing “softness, energy, and connection”. This was achieved by first using ground exercises, then mounting up and recreating the equivalent exercises in the saddle. This approach really worked for George, “it helped him be more rideable and not take over”. Anna is now competing George in dressage and finds that having a forward, energetic horse is great now that she has the tools and skills to channel that energy and make sure it was working with her, not against her. 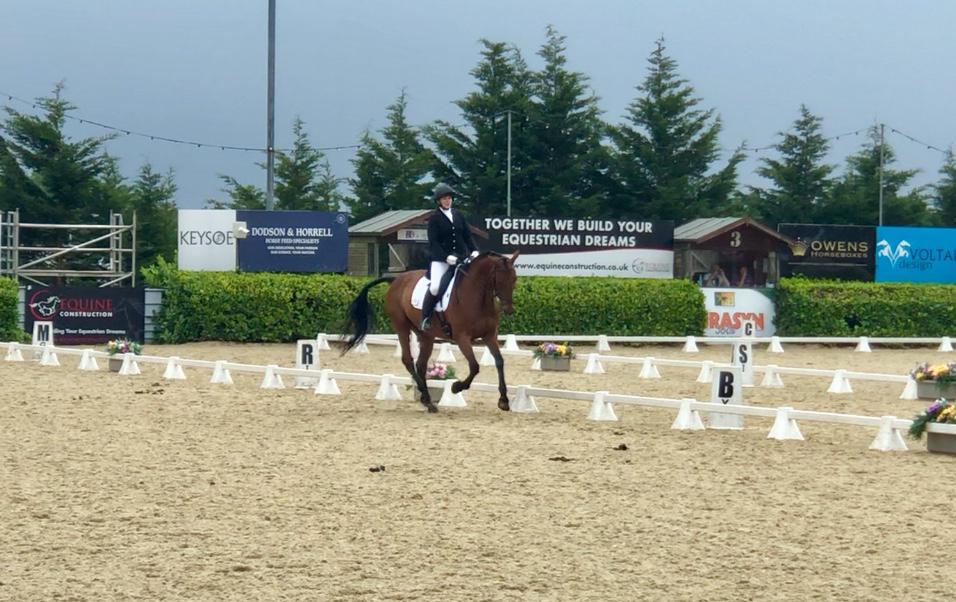 …growing up with Shady Horsemanship

Arty is a 5-year old Knabstrupper gelding, beautifully spotted and now standing about 16.2 hh. He has been part of Lindsay’s life since he was just ten months, and Shady has been part of Arty’s life for nearly as long.

Lindsay owned Arty’s uncle and was keen to get another one just like him, as he came to the end of his working life. So Arty arrived as a bay roan baby with just a spotty bum to show what he’d become. Unsurprisingly life with a youngster was not totally problem-free, and Arty developed a deep dislike of picking up his back feet. On a friend’s recommendation, she booked a visit from Shady and he quickly resolved the problem, while showing Lindsay what she needed to do to keep Arty happy and obliging. 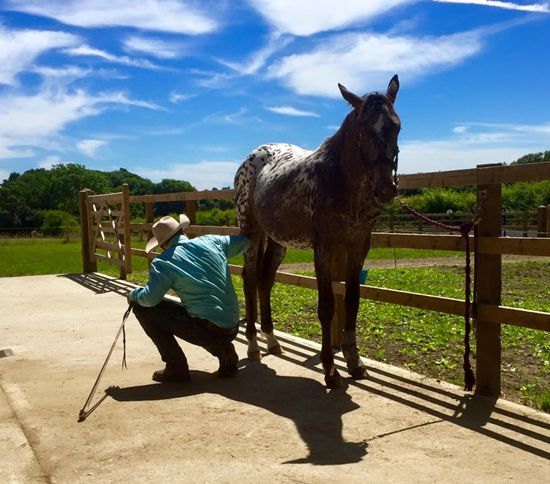 The years marched on and soon Arty was 3 ½ years old, and it was time to think about backing him. Lindsay started the work at home with the help of a friend, but then Arty had to pack his bags and head off to Shenley Stud to continue his education. Shady took about a month to get Arty working under saddle and then he went home for a bit of light ridden work with Lindsay, just walk and trot with some short hacks.

He was turned away until the following summer in order to mature some more, then it was off to Shenley Stud again for seven weeks of training. Some of Lindsay’s friends were skeptical because Shady took four weeks before he sat on him again, but Lindsay was confident that Shady was taking just the time needed to get Arty secure in his new life as a ridden horse. Then it was time for Lindsay to go and ride the ‘finished’ Arty, and her reaction was to burst into tears! (tears of happiness, I should emphasise). 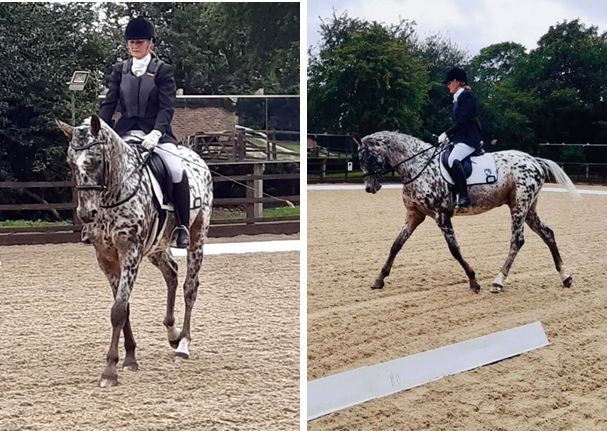 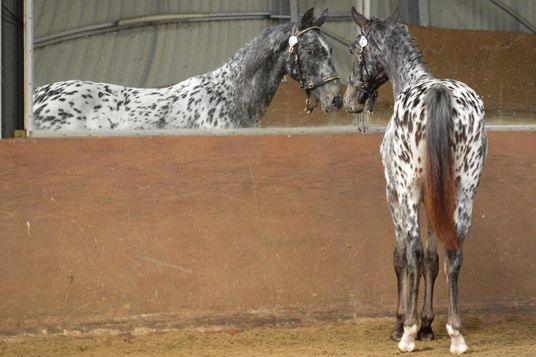 So it was not surprising that when Lindsay saw Shady was running an in-hand course at Shenley Stud she signed up with the now 2-year old Arty. She wasn’t having any particular problems with him, he’d attended the Knabstrupper Grading at 18 months old, had behaved impeccably and done really well, but she wanted to form the best relationship possible. Lindsay had done some horsemanship training some years before, but having seen Shady in action she had been impressed by how he always put the horse first. Lindsay had experienced some trainers who put the ‘show’ first, and sometimes pushed horses further and faster than they were ready to go, but Shady always broke things down into steps, and always took his time. They happily completed the course together and she went on to attend some in-hand shows with a very well-behaved horse. 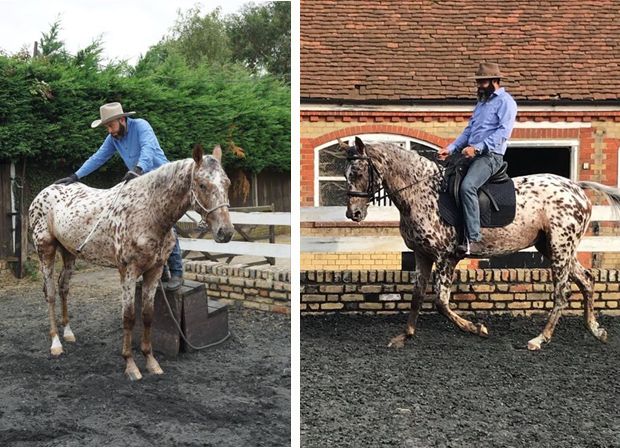 Since then Arty has gone from strength to strength. He has started his dressage career, winning at intro and prelim. He is Lindsay’s lifetime horse, so she is aiming for steady progress; next on the agenda is popping a few low jumps. He is a willing, calm and responsive horse, and going forward she is hoping to do a bit of everything with him. Shady Horsemanship exercises are still very much on the agenda, both in-hand and ridden. Arty’s ability to stand like a rock at any mounting block is the particular envy of Lindsay’s friends.

We hope that Lindsay and Arty’s story show that Shady Horsemanship training is not only for problem horses, and owners in crisis. You can use Shady’s techniques to achieve the best possible relationship with your horse. Shady has built a confident and trusting horse in Arty, and also a confident and trusting rider in Lindsay. We should perhaps give Lindsay the final words “Shady openly shares his tools and techniques, which equips owners to apply them to new learning points as well as reinforce old ones ….. I also do feel that he works carefully with the personality of each horse and doesn’t try to change them or suppress them.” So a happy story for both Lindsay and Arty.

and his farrier (and his vet, and his clipper…)

Click to read the article from Chiltern & Thames Rider

Want to find out more? Why not sign up to the online training or read Shady’s books “Feeling Safe” and
“Feeling Connected”.